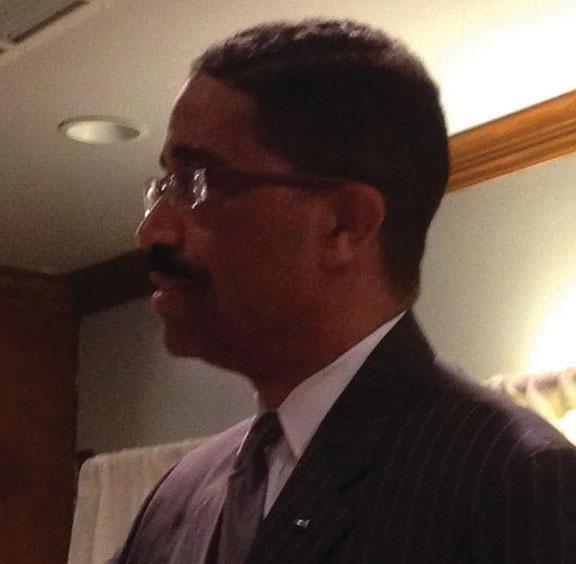 During a festive National Association for the Advancement of Colored People (NAACP of Craven County) annual Freedom Fund Banquet, held at The Flame Banquet Center in New Bern Saturday night, Superior Court Judge Michael “Mike” Morgan was keynote speaker and brought down the house more than once.

With “Eastern North Carolina Forward Together, Not One Step Back” the theme for the evening, Morgan shouted out the battle cry repeatedly, with 300-plus attendees chanting in unison. “We’re looking at the windshield, not the rearview mirror,” he declared, adding that “we’re not where we want to be, but we’re not where we used to be.”

Addressing the upcoming national election, he explained that it is the most important election ever and encouraged attendees to “vote as if your life depended on it, because it does.” Moreover, Morgan urged voters to fill out the entire, lengthy ballot when they vote.

Explaining that he spent his early youth in Washington, D.C., his late youth in New Bern and his college years in Durham, Morgan stressed that he calls New Bern home. The judge and wife Audrey currently live in Raleigh, and he is campaigning for a seat on the North Carolina Supreme Court.

His brother, Robbie Morgan, introduced him describing the judge as a friend, mentor, a God-fearing Christian and “the fairest man I ever met.” Robbie Morgan added that his brother will be the next member of the Supreme Court of North Carolina when those attending get out and vote.

Constance Swindell kicked off the evening by welcoming NAACP members and recognizing their talents. Shelvia Dancy, co-anchor of WCTI-12, served as mistress of ceremonies, and the Rev. Laura Johnson, minister of Broad Street Christian Church, Disciples of Christ, offered prayer. Valarie Kelley then sang “Your Grace and Mercy” with back-up and later belted out “May the Work I’ve Done Speak for Me” a capella.

Tameya Strayhorn presented the NAACP’s history, explaining that it is the oldest grassroots civil rights organization in the nation. It was founded on Feb. 12, 1909, she added, and the Craven County chapter was chartered in 1948.

Sergeant-at-Arms Sheila Johnson recognized New Bern Mayor Dana Outlaw, Craven County commissioners, county officials, the Board of Aldermen, the Board of Education, anyone running for office the first time, those re-running for elected offices, the Community of Excellence organization, New Bern Police Chief Toussaint Summers Jr. and the entire police force and families. Pointing at the audience, Johnson then offered, “You’re all dignitaries.”

The Humanitarian Award went to the Community of Excellence organization, presented by Audrey Fields. She explained that the organization focuses on at-risk youth. John Grant and Gregory Harrison accepted.

Next came the President’s Award, which went to Dr. Ed Bell of Raleigh, a native New Bernian. Marshall Williams, president of the Craven County branch of the NAACP, presented it and explained that Dr. Bell is an author and poet who tirelessly supports the NAACP and focuses on the journey of black boys.

Presented by Angelo Midgett, the last award was a $1,000 scholarship to the NAACP, furnished by Stubbs and Perdue Law Firm in honor of the late Samuel Kilpatrick, 46, of Fort Hood, Texas. Kilpatrick’s parents, Alfred Barfield and wife Lucinda, were recognized.

Closing remarks were by Michael Schachter, 2nd Vice-President of the Craven County branch of the NAACP, who stressed that “Black lives matter.” Reverent Esther Cannon offered the benediction.

Photo by Bonnie Burch/Special to the Sun Journal